He added that three people have been identified as the organisers.

"They will be called in in the near future and be issued compounds for illegal assembly," he said in a statement on Saturday.

Earlier, around 20 people had assembled at Dataran Merdeka with black flags and banners.

They also carried life-size dolls that were made up to look like “corpses” wrapped in white cloth.

ACP Mohamad Zainal said that at around 3pm, a police team was dispatched there to disperse the crowd.

"The crowd dispersed at 3.10pm. No incidents occurred," he said. 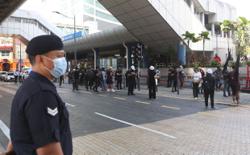