Giving back: Green Aim Sdn Bhd employees preparing the food items to be distributed to locals in need in Melaka.

MELAKA: A local firm in the historic city here wants to spread joy among the locals as it pledges an array of aid ranging from donating food items, settling outstanding rentals to sponsoring electronic gadgets for poor students.

Green Aim Sdn Bhd executive director Sulaiman Mohd Dewa said the company wanted the people of Melaka to know that they were not alone in facing the pandemic.

Sulaiman said during a recent meeting, the top management decided to set aside a special fund to give out urgent assistance to those in need.

“We want to assure the locals we will rebound soon and that it is not all ‘doom and gloom’.

“Our company will stand together with the people as one big and resilient community,” he said in an interview.

Sulaiman said it was also the initiative of managing director Teh Kok Kiang to bring cheer to the locals. “For us, money can be sourced through various ways but the community’s wellbeing is the priority for now.

“We do not mind sacrificing some of our profits and personal savings to help the people,” he said.

The oil refining and distribution company grew from humble beginnings about two decades ago.

Sulaiman said it would not be possible for them to have achieved success through the years without the support of the locals.

“I attribute our company’s achievements to the Malay, Chinese, Indian and the Portuguese communities.

“Green Aim is truly a Melaka brand,” he said proudly.

Sulaiman said as Melakans, they would also chip in towards the initiative in reaching out to the poor, needy and less fortunate.

He said the company planned to distribute food packages, including milk formula for infants, to all deserving recipients.

“We were told many students still need tablets and smartphones to study online, especially those in higher learning institutions.

“We will help by prioritising the B40 groups,” he said.

He added that two senior citizens and residents of three orphanages would be treated with satay, followed by the donation of essential items.

“We will enlist the help of volunteers to deliver satay to them as Melaka is still under Phase One of the National Recovery Plan,” he said.

In addition, Sulaiman said he would get the details of a family with a newborn who were chased out by their landlord after failing to pay their monthly rent.

“The sole breadwinner lost his job at a factory recently.

“We will provide diapers and other necessities for them,” he said.

The assistance was meant for a single mother from Rembia who has sought help from Yong and her three children.

“There were a number of daily wage earners who sought help in these trying times.

“The state government has covered most of the deserving cases,” he said. 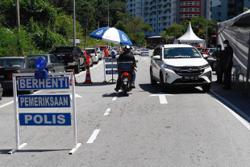