Instead, he said that it was Umno president Datuk Seri Dr Ahmad Zahid Hamidi who had fallen, as he did not have the support of Umno parliamentarians, except five of them, including himself.

He also said that Ahmad Zahid was a president who only prioritised his self interests, and that the door was closed for him to become deputy prime minister or prime minister.

Nazri said that Parliament should sit and convene to determine whether the government had fallen or otherwise.

"When you have voted for any motion in the Parliament and if the government loses, then we have lost the majority.

"Even then, it is not the end of the government because there is such a thing as a minority government. The Opposition is very much divided. Mahathir and gang don't support Anwar and DAP.

"So, the government has not fallen. I think Ahmad Zahid has fallen because he has come up with a statement that we MPs do not support, " he told The Star from Paris, France.

There were suggestions that the government had fallen after Ahmad Zahid announced that Umno pulled back its support for Tan Sri Muhyiddin Yassin as Prime Minister.

Nazri also said that Datuk Seri Ismail Sabri Yaakob, who was appointed as Deputy Prime Minister, is now seen as being the future de facto president of Umno.

He said that as Ahmad Zahid's term as Umno president expired on June 30, he was a caretaker president of the party.

He said that Ahmad Zahid should make sure the party meets up as soon as possible to choose a new president.

Nazri said Umno should speak to PAS and Parti Pribumi Bersatu Malaysia on how they could work together during the next general election.

"That is the only way to defeat Pakatan Harapan," he said.

Nazri said that he would be leaving France on Sunday (July 11) and should arrive in Malaysia on Monday (July 12).

Ahmad Zahid had announced that the party would withdraw its support for the Prime Minister after a virtual supreme council meeting on Wednesday (July 7) night that stretched till the early hours of Thursday (July 8).

Ahmad Zahid said the withdrawal of support came because Muhyiddin had not fulfilled seven requirements outlined by Umno when the government was sworn in on March 11 last year.

Ismail Sabri and Hisham in meeting with PM, say sources

POLITICS: Anything can happen as Umno withdraws support for Muhyiddin

Hostilities deepen ahead of big showdown 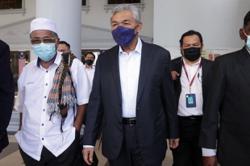