A file picture of barbed wire barricades placed at a stairwell of a residential block at the PPR Kampung Baru Air Panas dated July 3. – Bernama

KUALA LUMPUR (Bernama): The placement of barbed wire on a staircase at Block C of the Kampung Baru Air Panas People's Housing Project (PPR), here, was decided during a coordination meeting on the enhanced movement control order (EMCO) which was also attended by the Fire and Rescue Department.

Wangsa Maju district police chief Supt Ashari Abu Samah said residents could use other routes to exit the building in the event of an emergency.

He said the police and the Malaysian Armed Forces (ATM) always take precautions and are prepared for any eventuality.

Confusion arose among residents who were worried for their safety when several photographs showing armed forces personnel installing barbed wires along the staircase went viral today, he added.

"For your information, in the event of an emergency, the armed forces can remove the barbed wires in a short period of time and we are always monitoring the staircase," he said in a statement Saturday (July 3).

He said the police always prioritised the safety and well-being of the community, adding that anyone with any information or inquiries can contact the Kuala Lumpur Police Hotline at 03-2115 9999 or police stations nearby. – Bernama 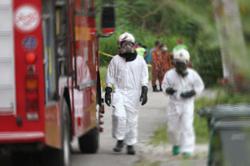