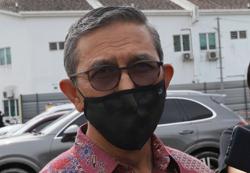 The Batu Pahat MP offered his apology and promised to give full cooperation to the police over their investigation on the matter. I’m sorry: Mohd Rashid said he will cooperate with the police over the matter.

“I am sorry over the confusion when some members of the media contacted me about the video where I answered their questions without properly checking it.

“After my audience with the Yang di-Pertuan Agong on Tuesday, I then had the opportunity to analyse the video involving me,” he said in a statement here yesterday.

The 13-second video went viral on Twitter showing a group of people eating durian at a farm without any physical distancing and some not wearing face masks.

Mohd Rashid said that since last year and until recently, he had been receiving complaints from farmers as well as vegetable and fruit growers who had difficulty selling their crops following declining sales.

He added that the viral video was shot during his visit to a durian kampung orchard run by the local community, which was affected by the Covid-19 pandemic.

“Coincidentally, Housing and Local Government Minister Datuk Zuraida Kamaruddin made a working visit to Batu Pahat where we gifted durians to her entourage to bring back home.

“After the entourage left, I was then brought to a durian orchard by one of the farmers in the afternoon to listen to the problems and discuss further,” he said.

Mohd Rashid said when he arrived at the orchard, the farmer served the king of fruit to them where he had a taste of the durian before discussing aid measures.

“If the purpose of the programme is to hand out aid then just give it to the recipients. No need to give out mock cheques or do speeches.

“This is an official function and as we know during present time, no functions are allowed to be held,” he said, urging the police to investigate the matter.

Batu Pahat OCPD Asst Comm Ismail Dollah said that a police report had been lodged over the case and one investigation paper had been opened.

“The case is being investigated under Section 18(1) of Prevention and Control of Infectious Diseases Act 2021,” he said, adding that the police were expected to call Mohd Rashid and other witnesses in to record their statement.

ACP Ismail added that members of the public should refrain from any speculation that could hinder the investigation process.