PETALING JAYA: An aid package worth RM150bil has been unveiled to help the people, businesses, as well as those vaccinated under Phase One of the National Recovery Plan (NRP) to curb the spread of Covid-19.

The government will also provide a total amount of RM10bil direct fiscal injection.

– The government will add up to RM500 for Bantuan Prihatin Rakyat (BPR) for the month of July with payments to be made from June 29.

The third phase of the BPR between RM100 and RM1,400 will be paid in September as well as payments for those with successful appeals. Altogether, a total of RM4.9bil will be paid out under BPR.

– Government to expand job seekers' allowance to Social Security Organisation (Socso) non-contributors, especially new graduates and informal sectors. They can register at MYFutureJobs and will receive an allowance of at least RM300.

– Bantuan Khas Covid-19 (BKC) initiative for several categories. They are:

The BKC is expected to benefit more than 11 million households and the elderly as well as singles with an allocation of RM4.6bil.

– The government will allocate a total amount of RM10mil to implement the food basket initiative, especially for the Orang Asli

– Government to allocate another RM1bil to ensure that the price of 1kg polybags of cooking oil remains at RM2.50,

– RM15mil will be allocated to non-governmental organisations to help social issues such as mental health, homelessness, and others.

– To address the cost of living issue, the government will maintain the retail price for RON95 petrol, diesel and LPG, which is expected to involve subsidies of RM6bil this year.

– The government will also implement a price control programme based on the threshold value of crude palm oil to control the price of 1kg to 5kg of cooking oil bottles.

– Economic sectors that have been badly hit – particularly hotel operators, theme park operators, convention centres, shopping malls and tour operators – will get a three-month extension of electricity bill discounts of 10% from October to December.

– Telecommunications companies have agreed to extend the 1GB of daily free data until the end of the year. This initiative is estimated to be worth RM500mil and will benefit 44 million registered users in the country.

– Additional RM500 to eligible recipients under the Prihatin Special Grant (GKP) 3.0 initiative, with payment expected to be made by mid-July this year. In total, the government has allocated a total of RM5.1bil via the GKP initiative.

– Understanding the struggle of the SMEs, the government announced an additional payment of RM500 under GKP 4.0 to eligible recipients which will be paid in September and another RM500 in November this year.

– The government will allocate RM18mil for local banks to provide about 30 units of mobile banks in Peninsular Malaysia, Sabah and Sarawak, which are expected to cover 250 rural localities.

Through this initiative, various banking services including opening of accounts; savings, withdrawal and transfer of money; bill payments as well as digital banking can be accessed.

– Government will continue the Wage Subsidy Scheme for the fourth time with an allocation of RM3.8bil, expected to benefit more than 2.5 million workers. Through this scheme, the government will support up to 500 workers per employer with assistance of RM600 per worker for four months. This will be two months for every sector in the second phase of the National Recovery Plan, and another two months for the sectors categorised as negative in the third phase of the NRP.

There are no salary limit conditions, and this means that employers can apply for the scheme even if their employees earn more than RM4,000 a month.

– Government will automatically exempt payments for the HRD levy for two months to employers who are not able to operate during phase one of the recovery plan.

– Employers from new sectors as a result of the expansion of the Human Resources Development Fund Act 2001 will be given a levy extension under Dec 2021. This initiative is estimated to be worth RM425mil.

– The Government will extend the PenjanaKerjaya programme that is due to end in June with several improvements. This includes reducing the salary eligibility limit from RM1,500 to RM1,200 ringgit for the “Malaysianisation” programme to give more incentives to employers to replace foreign workers with local workers. The employment contract period will also be reduced from 12 months to six months for employees aged 50 and above, the disabled and former prisoners.

– EPF will introduce a new withdrawal facility called i-Citra where a total of 12.6 million EPF members can make withdrawals of up to RM5,000 with a fixed payment rate of RM1,000 per month for five months, subject to the member's total EPF savings.

This is expected to channel RM30bil to the people for their daily needs. Members can start applying for the facility on the i-Citra online portal at icitra.kwsp.gov.my from July 15, with the first payment expected to be credited to the member's account in August.

– An six-month automatic moratorium for all borrowers, regardless if they are from the B40, M40 or T20 groups. Borrowers will only need to apply and approval will be given automatically by the banks. It will be open from July 7, 2021. They are also required to apply and sign an agreement on the related loan terms. 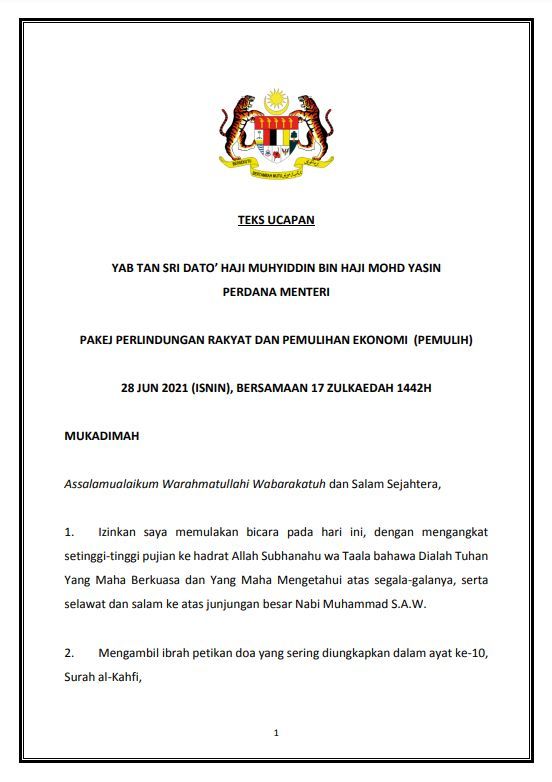 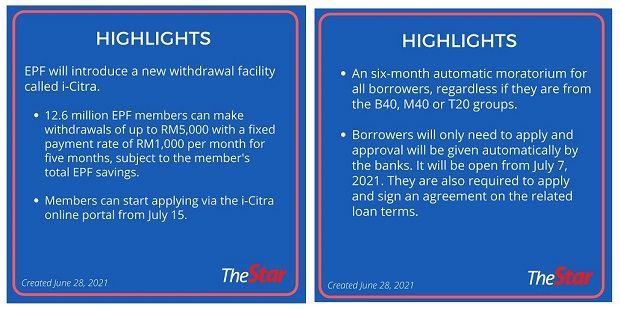 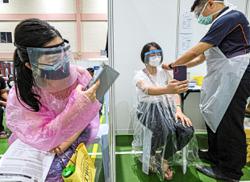