KUALA LUMPUR (Bernama): Police have received a report on a letter purportedly linking Foreign Minister Datuk Seri Hishammuddin Hussein, to seek an audience with the Yang di-Pertuan Agong to present the total MP support for the minister.

Wangsa Maju OCPD Supt Ashari Abu Samah said police have opened an investigation paper under Section 504 of the Penal Code and Section 233 of the Communications and Multimedia Act 1998.

"The case would be referred to Bukit Aman CID for further action,” he said when contacted on Thursday (June 24).

Mohd Hafiz said the letter is fake and it has been disseminated with the intention to create confusion among the people.

"The fake letter is a dirty tactic of parties with interest to create trouble and is taking the opportunity in the current political situation of the country,” he said in a statement on Thursday.

The letter was designed using the letterhead of Barisan Nasional treasurer-general with Hishammuddin’s signature as well as the stamp of receipt by Istana Negara Management Services Department with the purpose of making it appear authentic.- Bernama 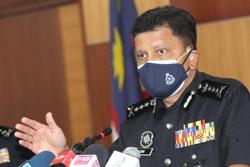