Spreading the word: Ongkili (left) talking to villagers who turned out for the vaccination programme in the Sonsogon area in Sabah’s northern Kota Marudu district.

KOTA KINABALU: The expansion of the vaccination drive to far-flung areas in Sabah has picked up pace.

A group of doctors, nurses and volunteers from NGOs under the supervision of the state Health Department travelled in 4WD vehicles to five remote villages of the Sonsogon hinterland in northern Kota Marudu district.

“There are over 700 villagers from eight villages scattered throughout this hilly area. Of the figure, some 300 are the focus of vaccination in the area for now,” he said at the launch of the three-day vaccination programme in Kampung Sungai Magandai that began on Tuesday.

Mobile teams have begun to move into remote villages in many parts of the state over the past two weeks.

For Kota Marudu district, data showed that a total of 15,265 people have registered for the vaccination programme via MySejahtera as at mid-June.

A total of 6,018 have received their first dose while 1,949 have completed both doses.

Ongkili said the outreach programme was important as the villagers in the remote areas did not have easy access to the towns.

“The response has been a bit slow but encouraging, and we hope more will come forward,” he added.

Ongkili, who is Kota Marudu MP, said the ongoing vaccination campaign aims to curb the spread of Covid-19 and eventually end the pandemic in Malaysia.

“Although the vaccine is not an antidote, at least it builds our antibodies to fight against the deadly virus.

“We need to protect ourselves first to protect others, so do not be afraid of the vaccine. It saves lives,” he added.

During the campaign, Ongkili also donated a wheelchair to Jasika Linggin who received it on behalf of her six-year-old special needs child, Shalvendra Sius. 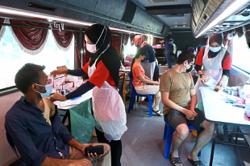 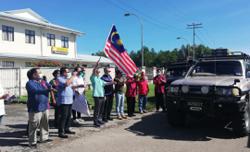