Checking compliance: Police at the wedding reception held at a house in Butterworth during the national lockdown period.

BUTTERWORTH: A cameraman, a wedding planner and the father of the bride were fined by police here for violating the lockdown by throwing a wedding reception.

“They were each fined RM2,000 for holding an event that is not allowed during the lockdown,” he said.

ACP Noorzainy added that during the raid, police found 19 family members plus the father of the groom, the wedding planner and the cameraman gathered at the reception.

The 19 were household members and were not issued compounds as they were not found to have violated any SOP but were given a stern warning.

During the rest of the compliance check in the district, police issued compounds to another 38 individuals, including four women, for various SOP violations.

ACP Noorzainy said police would not compromise with any parties or individuals to ensure the SOP during lockdown is complied with. 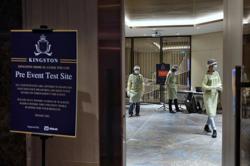