The two deaths are a 31-year-old man in Labuan and a 36-year-old woman in Negri Sembilan.

“There were a total of 76 deaths today involving 27 cases in Selangor, nine cases each in Kuala Lumpur and Negri Sembilan, eight cases in Johor, five cases each in Sabah and Melaka, four cases in Sarawak, three cases in Kelantan, two cases in Kedah, and one case each in Penang, Perak, Pahang and Labuan, ” he said.

Dr Noor Hisham added that all of the fatalities are Malaysians and said that this brings the current Covid-19 death toll to 3, 844.

In his statement on Saturday, Dr Noor Hisham also said that there were more recoveries today (8, 334 cases) over new cases (5, 793). This is the fifth day in a row where recoveries overtook new cases.

There were six new imported cases; four of whom are citizens and two non-citizens.

The number of active cases now stands at 76, 247. Of this, 914 are in Intensive Care Units (ICUs) while 459 require ventilator support.

The new clusters were from communities (7), workplaces (15), and detention centres (2). 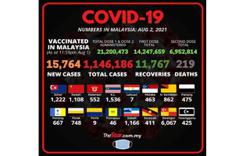