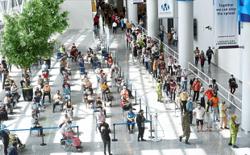 KUALA LUMPUR: The mega vaccination venues at the KL Convention Centre and Axiata Arena Bukit Jalil have been given the thumbs-up by those who came to get their jabs on the first day.

Both centres saw a steady stream of people arriving as early as 8am yesterday, where they were welcomed by friendly volunteers and medical personnel who assisted them during the registration and counselling sessions before vaccination.

Most senior citizens who arrived were seen accompanied by caretakers and provided with wheelchairs, as well as a special lane for a speedier vaccination process.

Among the first to arrive at the KL Convention Centre (KLCC) was ex-army man Abd Nassair Ghani, 59, who was accompanied by his daughter Asha Nur, 30.

“I was very impressed as the process was done in a very orderly and friendly manner, ” he said when met after receiving his first dose of the Sinovac vaccine.

He said that he arrived at about 8.30am and completed his vaccination process in less than 30 minutes.

“I am the first in my family to get vaccinated and I hope that all of them will get theirs soon too, ” he added.

Retired sale representative Shinder Kaur, 57, who was accompanied by her son Harpreet Singh, 28, expected to see a big number of people at the centre.

“We were expecting a large crowd and long queues, but we were pleasantly surprised at how fast and efficient the process was, ” Harpreet said, adding that it took less than 30 minutes for his mother to get her Sinovac jab.

Samsimar Kariah Usman, 86, who was in a wheelchair, said she came with her daughter and grandson.

“I was very impressed at how smooth the process was.

“The centre is very spacious and the volunteers here are very friendly and helpful, ” she said, adding that it took less than 30 minutes to complete the vaccination process.

She said she did not have to queue for long before finally getting her jab.

“Alhamdullilah, I feel fine after getting my vaccination.

“There is no side effect at all, ” she added.

Another national athlete, weightlifter Muhammad Iqram Haikal Mohd Zuari, 19, said that he felt much safer after getting his second dose.

“Before this, I was a bit worried if I wanted to socialise or work out, but now I feel there is some sort of protection against Covid-19, ” he said.

He added that the process to get his second dose was much faster than the first time at Desa Tasik Sports Complex.

“Previously, I waited for quite long, but it took less than two to three minutes (at each checkpoint) here, ” said Muhammad Iqram.

“It was extremely good and I was very impressed with the process. It was fast and smooth.

“I feel appreciative of all the frontliners here, ” she added.

Teng said they arrived at 8.50am and completed the process at 9.15am.

“We did not bring her wheelchair but we were offered one, ” she added.

Senior citizen Norma Jani, 64, said she completed her vaccination within half an hour after her arrival at 9am.

“All the volunteers were friendly. I urge everyone to get their vaccinations as soon as they can, ” she added. 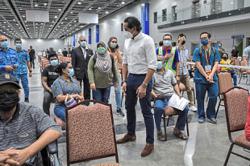