The Academy of Medicine of Malaysia (AMM) said the government must prioritise Covid-19 interventions that will help reduce the number of cases as well as to protect hospitals and intensive care facilities during the two-week lockdown to allow "our healthcare professionals a breather and respite".

The Academy highlighted the United States Centre for Diseases Control (CDC) which has debunked the public sanitisation approach.

It said in a statement on Thursday (June 3) that the CDC notes "spraying cleaning products or disinfectants in outdoor areas - such as on sidewalks, roads or groundcover - is not necessary, effective or recommended."

The Academy also pointed out that the World Health Organisation (WHO) has also issued an alert about the hazards of public disinfections as the chemicals used, such as formaldehyde, chlorine-based agents or quaternary ammonium are not recommended due to its adverse health effects.

It added that the Health Ministry should update its "Garis Panduan Pembersihan dan Disinfeksi di Tempat Awam" to reflect this and said that this called for a whole-of-government effort to produce ventilation guidelines for all indoor space instead as scientific evidence point to Covid-19 being an airborne virus.

"Moreover, ministers are expected to be prudent in their spending to achieve the best possible outcomes with minimal expenditures and diminishing fiscal reserves " it said.

The nationwide sanitisation exercise was criticised by Dr Adeeba, who is the University Malaya Medical Centre (UMMC) Covid-19 task force chair, in a tweet on May 29.

The sanitisation exercise was launched by Housing and Local Government Minister Datuk Zuraida Kamaruddin on May 30.

In her tweet, Dr Adeeba had said that the resources spent on the exercise could be better channeled towards personal protective equipment, high flow nasal cannulas, ventilators, oxygen saturation meters and food for volunteers, among other things.

This led to several officials coming out to defend Zuraida in response to the criticisms from Dr Adeeba.

Nor Hizwan Ahmad, the political secretary to Zuraida said in a statement on Friday (June 4) that a total of 26,000 santisation operations have been conducted since the Covid-19 pandemic hit the country and will continue as an effort to prevent Covid-19 infections, citing new variants present in the community. 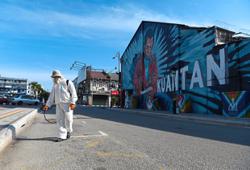