JOHOR BARU: Two Malaysians working in Singapore are being harassed by illegal moneylenders after trying to borrow money to recover their losses in an investment scheme.

“We have been working in Singapore for the past five years and have saved up a significant amount of money, enough to buy a house back home.

“We initially invested in a unit trust scheme through a friend in April in hopes of saving up even more money in the next one or two years so that we can return to Malaysia and start a business but did not expect it to end in losses.

“To recover our losses, we found a Facebook page advertising moneylending services in Singapore and contacted them on May 16, thinking that it was a legitimate moneylender.

“I did not know at the time that moneylenders in Singapore, even legal ones, are not allowed to advertise their services in public or social media, ” he said in a virtual press conference on Tuesday (June 1).

After submitting their identification documents to the moneylender, they were informed that the application was rejected, as they were not locals, and would have to pay S$2,500 (RM7,815) as an activation fee in order to get the loan, said Jackie, who works in the food and beverage industry.

Desperate, they did as told but the moneylender asked for another S$3,000 (RM9,377) to “process the application”. By then, the two of them felt suspicious and wanted to cancel the loan.

“We took the second option but on the fourth day, he threatened to splash paint at my friend’s house in Taman Johor Jaya, Johor Baru if we did not continue paying, so we transferred another S$200 to him.

“After seeking advice from a policeman, we ignored the moneylender. However, on May 27, my friend’s house was splashed with red paint, which also damaged her front gate, porch and car.

“The moneylender threatened to do more harm and asked for S$1,800 (RM5,625), which he said was inclusive of a fee to pay the runners who splashed paint at my friend’s house.

“We also did as told out of fear for our family members’ safety, ” he said, adding that police reports have been lodged in Singapore and Malaysia.

When contacted, Seri Alam OCPD Supt Mohd Sohaimi Ishak said a police report regarding the paint splashing incident was received on May 27 and investigations are ongoing under Section 427 of the Penal Code.

“With the total lockdown in place until June 14, I believe more people will face financial difficulties, which could lead to them asking for a loan from illegal sources or Ah Long.

“It is best not to do so as such moneylenders usually have hidden charges or conditions to trap their victims, ” he said. 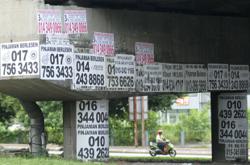