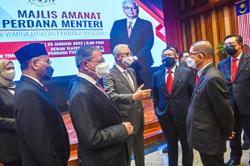 KUALA LUMPUR: The Home Ministry, through the police, will tighten the standard operating procedures (SOPs) for the detention of suspects in lock-ups from time to time.

"Such measures are meant to prevent custodial deaths in the future," the ministry said in a statement on Friday (May 28).

The statement was issued after the ministry received a memorandum on custodial deaths, handed over by the Klang and Selayang MPs, as well as three Selangor assemblymen.

The ministry said as soon as a death in custody is reported, police and relevant authorities have been instructed to conduct a thorough investigation based on existing laws and procedures.

"All custodial death cases have been investigated thoroughly, fair and transparent in accordance with the law.

"Stern action will be taken against any party for negligence while on duty or any offence that causes such occurrences," it added.