“We have to investigate all possibilities and angles.

Dr Wee said the report would be completed two weeks from the day of the incident.

“No assumptions will be made now. 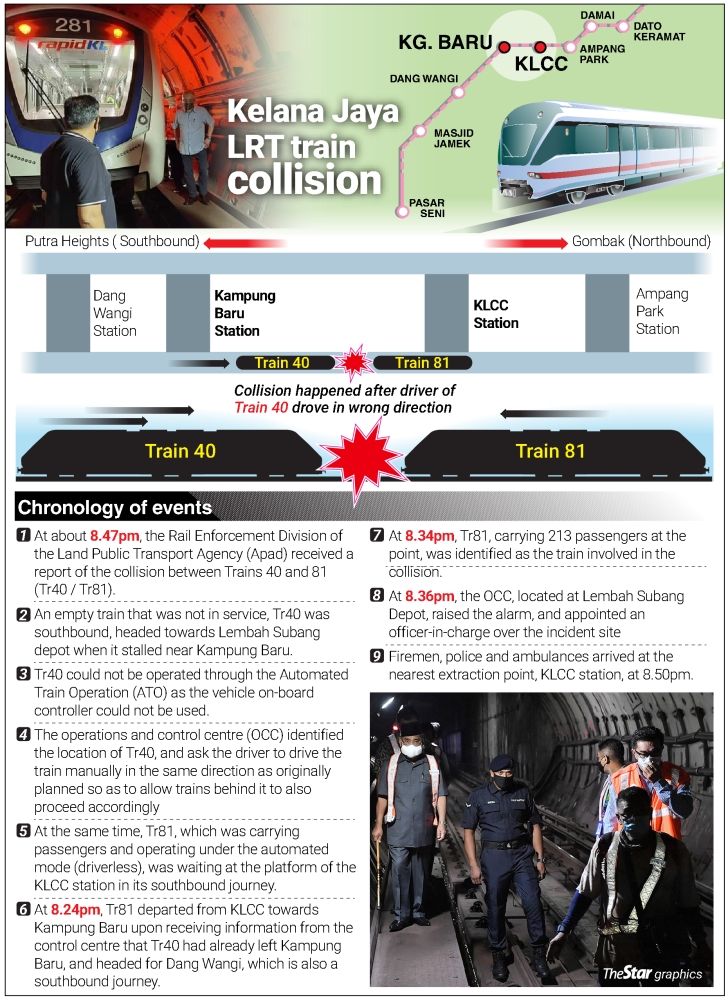 “Then a report will be sent to the minister, and it will be discussed at the Cabinet.

“We are working day and night, ” said Dr Wee, who thanked all parties involved in the rescue, including the police and firefighters.

The Transport Ministry has also set up a special committee headed by ministry secretary-general Datuk Isham Ishak to investigate the incident.

Dr Wee said the Transport Ministry would prepare a Cabinet paper on the accident and produce an action plan with proposals for long-term improvements to safety for train operators.

In Monday’s incident, Train 40 had no passengers as it was not in service.

When it was taken over by a driver in manual mode, Train 40 was supposed to head southbound towards the Dang Wangi station, but it instead headed towards Gombak or northbound.

Following the head-on collision between the two trains about 100m from the KLCC station, all passengers were evacuated by 9.28pm.

While reiterating that Prasarana would extend financial assistance of RM1,000 to each of the victims, Dr Wee said the government’s priority now was to ensure the victims receive adequate medical treatment.

He also said financial assistance would be extended to those who lost their income due to this accident.

“For the Transport Ministry, we sympathise with those who were injured, ” he said.

“The three are in a semi-critical condition, but they are stable.

“The injuries range from internal bleeding to fractured bones.

“One has injuries to the chest, ” he said, adding that in total, six patients were still warded.

Dr Heric added that 61 patients who were admitted on Monday evening had been treated and discharged.

Dr Wee said that the LRT operator, Prasarana Malaysia, had been given three days to remove the trains and clear all debris inside the tunnel.

He also assured that efforts would be made to prevent overcrowding at LRT stations, while free bridging bus service would be provided.

“We will also mobilise officers to ensure SOP compliance, and we will limit commuters on platforms, ” he said, adding that this matter was expected to be solved in the coming days.

The Kelana Jaya line was the first fully automated metro line in Malaysia when it started operation in 1998.

With 37 stations, it is the busiest metro line in Malaysia, moving nearly 300,000 passengers on an average working day before the Covid-19 pandemic.