IPOH: There will be 11 additional roadblocks set up starting Saturday (May 22) at the four districts in the state placed under the enhanced movement control order.

“Some 962 police personnel will be on duty at the enhanced MCO areas manning the roadblocks, as well as those monitoring the public if they are adhering to all SOPs.

“Besides that, there will be 308 personnel from other uniformed bodies assisting the police, ” he said.

On Thursday (May 20) Senior Minister Datuk Seri Ismail Sabri Yaakob said the order has been imposed on 15 localities in Besut, Terengganu, and other states including four districts in Perak due to a sudden surge of Covid-19 cases.

Comm Mior Faridalathrash said barbed wires would not be fixed due to the huge area under the enhanced MCO.

However, he said at several smaller lanes, barbed wires would be placed to prevent people from using shortcuts.

“The police will be doing their rounds strictly to monitor the movement of people, especially after 10pm.

“Stern action will be taken against those not adhering to the laws and SOPs, ” he added. 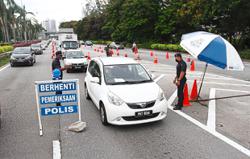 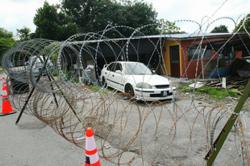