He takes over from Comm Datuk Seri Abd Rahim Jaafar, who is retiring on Wednesday (May 19).

Comm Abd Rahim handed over the reins to Comm Azri on Tuesday (May 18).

Comm Abd Rahim bids farewell to a 35-year career in the police force, which began on Feb 2, 1985.

In a statement, the police said Comm Abd Rahim started his career at the Kelantan police headquarters Criminal Investigation Department (CID) before being appointed as Pasir Mas deputy OCPD.

His expertise was vast especially in matters concerning CID.

When he was Johor CID chief, Comm Abd Rahim recorded a huge success in bringing down the M-16 gang.

Always giving his best, Comm Abd Rahim was also active in sports including cycling and golf.

He often represented the Royal Malaysia Police (PDRM) at the highest level, including at the World Police and Fire Games. 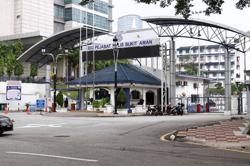