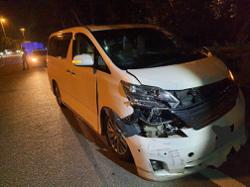 GEORGE TOWN: It was a quiet first day of Hari Raya Aidilfitri as Malaysians observed the strict standard operating procedure for the second year running amid the Covid-19 pandemic.

At the Penang state mosque in Jalan Masjid Negeri, the 50 people allowed into the premises left after performing morning prayers.

Traffic on main roads in the city was relaxed, with no major jams, while it was all quiet on the tourist front and shopping malls.

At a roadblock on the Tun Dr Lim Chong Eu Expressway, motorists queued up for inspection before heading for the Penang Bridge.

“No compounds for unauthorised travel were issued since the movement control order was imposed on May 10, ” he said, noting, however, that 18 compounds had been issued for SOP violations.

“They were for not wearing face masks in crowded places and failing to register with MySejahtera before entering premises, ” he said.

ACP Soffian brought Raya goodies for his men who were on duty on the first day of Hari Raya.

Meanwhile, some 1,500 frontliners on duty received food aid from the state government.

“During Hari Raya, we record about a 5% increase in household waste every year. The amount of waste produced during the Raya period is about 20% more than regular days, ” he said before receiving food aid from Penang housing, local government, town and country planning committee chairman Jagdeep Singh Deo.

Penang Island City Council (MBSP) mayor Datuk Yew Tung Seang thanked the state for the food supplies, saying it was timely for those working tirelessly on the ground during the festive period. 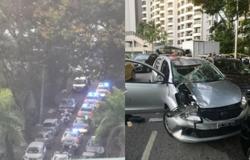