PETALING JAYA: Covid-19 appears to be spreading at a rapid pace in Selangor and there are cases that do not seem to be linked to any clusters.

Selangor Task Force for Covid-19 chairman Datuk Seri Dr Dzulkefly Ahmad said the number of positive cases detected in yesterday’s screening was indicative of the widespread transmission of the virus.

“The results are telling us that there are sporadic cases that do not appear to be linked to any clusters, ” he said.

“We have to now investigate the link to these cases.”

The screening initiated by the Selangor state government was carried out by Selcare, the administrator of the state’s healthcare programme, Skim Peduli Sihat.

Dr Dzulkefly said current cases appeared to have emerged from within communities due to congestion, close proximity interaction and crowded places.

He added that one of the solutions to counter the spread of infection would be to warp speed antigen rapid testing and contact tracing.

“Most importantly, people must be extra careful and those who are positive or suspected to be positive must not be allowed to roam around, ’’ he said.

Recently, Selangor Mentri Besar Datuk Seri Amirudin Shari related the story of an individual who had gone for Covid-19 screening and visited a shopping mall before he received the result of the test.

He was later found to be positive, but by then hundreds of people had been at the mall while he was there.

“That is why there are Covid-19 cases in schools now, ” she said.

Students were infected at home or from outside and brought the virus to school, which resulted in schools having to be closed.

Recently, almost 80 schools throughout Selangor were closed after some teachers and students were infected.

Selcare manager Mohd Noor Md Nasir said the number of people who turned up for the Covid-19 screening at the Kajang and Semenyih state assembly constituencies yesterday was far more than expected.

Selcare had expected about 500 people at each of the constituencies, he said when contacted.

“We received 629 people at Dewan Orang Ramai, Bandar Rinching, Semenyih and 1,052 at Dewan Cempaka at Saujana Impian in Kajang.

“And there were still many people who were arriving to be tested when screening ended at 4pm. We told them to come to our screening centres at the Balakong and Sungai Ramal state assembly constituencies tomorrow (today), ’’ he added.

According to Mohd Noor, quite a number of positive cases was detected at both centres yesterday.

“We told those who had tested positive to go home and isolate themselves while waiting for the Health Ministry to contact them, ’’ he said.

The Selangor state government initiated the screening exercise to identify people in the local communities who could be infected due to the rapid increase in the number of Covid-19 cases in the state.

Out of Selangor’s nine districts, six were classified as Covid-19 red zones. 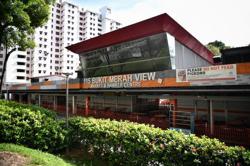