IPOH: A 35-year-old man armed with a parang entered the grounds of the Armed Forces’ border battalion in Gerik and died after he was shot during a struggle with the personnel there.

Perak police chief Comm Datuk Mior Faridalathrash Wahid said on Sunday (May 9) that the man climbed over the main gate of the 4th Regiment battalion at about 6.45pm on Saturday (May 8).

He said the man was warned by the personnel at the security post, but instead he turned aggressive by attacking them using the weapon he brought along.

“During the struggle, the army personnel opened fire and hit the man. The incident was reported to the police by the battalion representatives, and the man was rushed to the Gerik Hospital for treatment, but he died later, ” he said.

Mior Faridalathrash said initial investigations carried out found that the man was a former army personnel.

He said the man started his service in the Army in 2003, but due to mental health problems, was discharged in 2013.

“We visited the site of the incident, and several items in relation to the case have been confiscated.

“The post mortem will be carried out Monday (May 10) at the Raja Permaisuri Bainun Hospital, ” he added.

The case, he said, would be investigated under Section 9 of the Protected Areas and Protected Places Act 1959.

He said the police would complete their investigation papers and refer the case to the Attorney General’s Chambers for further action. 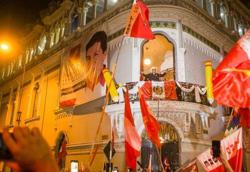