KUALA LUMPUR: With the AstraZeneca vaccine opt-in exercise off to a smooth start, Science, Technology and Innovation Minister Khairy Jamaluddin says Phase Three of the National Covid-19 Immunisation Programme, which is set to start this month, may be delayed.

Khairy, who is also the programme’s coordinating minister, said a lack of vaccine supplies in the country currently could lead to a delay in the vaccination plan.

“I don’t know if we have enough supplies... we will make an announcement on that, ” he said.

The third phase of the programme is slated to commence in May and go on until February 2022.

Khairy reiterated that the slow pace of the vaccination programme was not caused by the government but by pharmaceutical companies prioritising rich countries in vaccine distribution.

“We gave appointments to more than 260,000 people in one day. It’s not that we can’t do it fast but it’s the supply of vaccines that is slow, simply because pharmaceutical companies prioritise rich countries and give deals to them that are not on offer to developing countries.

“That’s something the international community will have to discuss, not just managing Covid-19 but also in terms of future pandemic management, ” he said during his tour of the AstraZeneca vaccination centre at the World Trade Centre Kuala Lumpur yesterday. 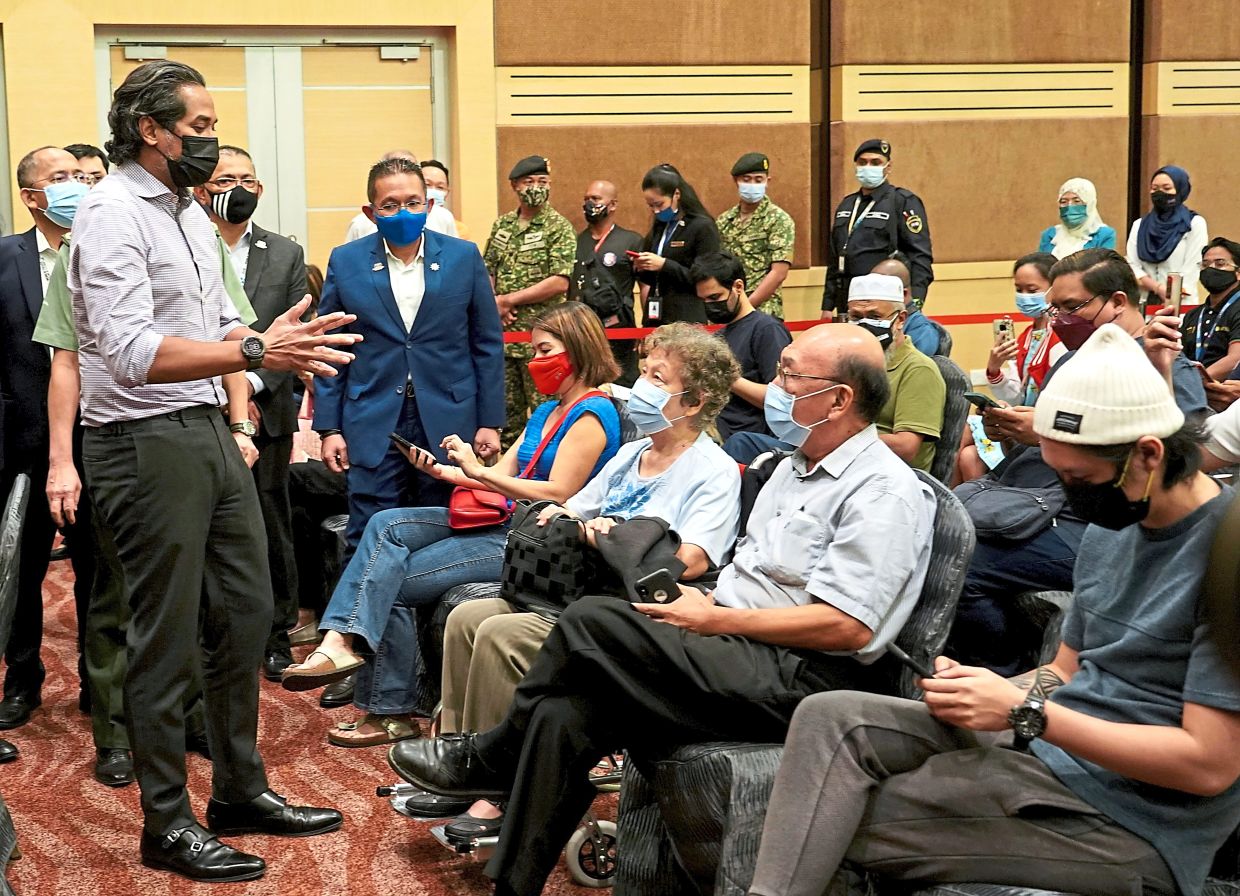 Touching base: Khairy speaking to some recipients of the Astrazeneca vaccine at the vaccination centre at the World Trade Centre Kuala Lumpur. — AZHAR MAHFOF/The Star

Acknowledging that while many Malaysians intend to get vaccinated, Khairy said there simply weren’t enough stock at the moment.

“People tell me all the time that they want the vaccine. Well, they are not sitting in a freezer in KL.

“The vaccines have not arrived yet. They (will) arrive gradually, ” he added.

However, Khairy assured the people that there would be more vaccination slots next month because “the rich countries have already inoculated most of their citizens”.

He also said that members of the media would be included in the current second phase and inoculated later this month.

“I have discussed this with media outlets and got lists of journalists, ” he said.

He also said that those who had vaccination appointments were permitted to travel across borders and districts despite the latest movement control order, which starts today in six districts in Selangor.

“They only need to show their appointment on the app or print out from the web or SMS, ” he added.

Previously, Khairy said that about 75% of the 1.9 million doses of vaccines in the country had been administered.

Later this month, 1.1 million doses of AstraZeneca vaccine will be delivered via Covax, the vaccine-sharing facility run by Gavi Vaccine Alliance and World Health Organisation to bring doses to lower-income countries.

Another 610,000 doses are expected to arrive next month, followed by about 410,000 in July, coming directly from AstraZeneca.

In August and September, another batch of 1.2 million doses of the AstraZeneca vaccine will hit Malaysian shores.