Shields up against the virus: The national opt-in programme for the AstraZeneca vaccine rolls out without a hitch. For the thousands who turned up on day one, it was a painless process. >3

KUALA LUMPUR: The national opt-in programme for the AstraZeneca vaccine went off without a hitch as hundreds of people turned up to receive their Covid-19 jabs at vaccination centres in the Klang Valley.

At World Trade Centre Kuala Lumpur (WTCKL), people queued up with physical distancing being abided by at all times.

Nurses at the venue were also seen calling out the names of individuals according to the time slots they had selected last Sunday.

All 268,000 slots were snapped up by residents in the Klang Valley in about three-and-a-half hours when registration was opened at noon that day.

At WTCKL, locals and foreigners were seen arriving as early as 10am to take their scheduled shots.

Headhunter EK Cheah, 66, praised the authorities for making the inaugural process a smooth one.

A Dutchman who wished to be known only as Peter said he grabbed the opportunity to be inoculated because he was already feeling “pandemic fatigue”.

“I’m done sitting at home. If I don’t get jabbed now, I might only get a chance end of this year or next year.”

Peter, who has lived in Petaling Jaya for decades, also said he was pleased with how it had gone.

Executive Hajar Masturah Mohamad Nasir said her turn came half an hour after she arrived at 11.30am.

“The process was really smooth.”

As of noon, 648 people had received their jabs, with the rest continuing until 9pm, he said.

He also said the AstraZeneca vaccinations will be expanded across other states classified as red zones when the additional one million doses arrive later this month.

He said once Covax announces more details on vaccine distribution, then the Covid-19 Immunisation Task Force (CITF) will discuss with state governments to open up more vaccination centres.

“From our experience, we are quite confident that we can open up a vaccination centre between 48 and 72 hours.”

Meanwhile, Khairy said many who signed up for the opt-in programme last Sunday had received their appointments, save for some who encountered a mismatch between the IC number registered at the MySejahtera app and the vaccine database.

“I will see how CITF can rectify this, ” he said.

At Universiti Malaya, the administration of AstraZeneca vaccines also proceeded smoothly as the public gave the authorities the thumbs up for good management.

Elizabeth Lopez complimented the medical team at UM for being organised and friendly while Siva Ramanathan said he was happy to do his part as a Malaysian in ensuring herd immunity.

Siva also noted that AstraZeneca has been successfully used in Britain and Europe.

Hazmy Iman said that the probability of getting side effects from the AstraZeneca vaccine is low.

“It’s beneficial to get vaccinated, ” he said. 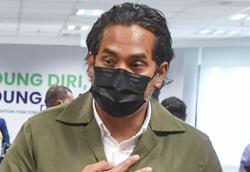