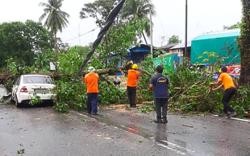 BUTTERWORTH: More trees are falling in Penang as the almost daily inter-monsoon storms roll on.

The Seberang Prai City Council (MBSP) Crisis Management Department said a total of 17 trees weighing around 19 tonnes had fallen due to the freak storm in the Seberang Prai area on Tuesday (May 4).

“Three trees had fallen along Jalan Arumugam Pillai in Kampung Pelet and were blocking the road completely.

“One tree had also fallen just beside the Telekom Malaysia substation along Jalan Arumugam Pillai.

“Another fallen tree was reported at Kampung Padang Ibu in Guar Perahu while four more were reported in Kampung Pelet in Kubang Semang.

“Another four trees fell at Bukit Indra Muda, three at Kepala Gajan in Simpang Ampat and one at Kampung Guar Perahu," the local authority said in a Facebook post Wednesday (May 5).

MBSP added that its emergency hotline, at 1-800-88-6777, started receiving distress calls about the fallen trees at 4pm on Tuesday (May 4).

“Although it is Ramadan, our men are not tired of responding to calls of fallen trees which cause road closures or have fallen on houses and vehicles.