Toll hikes delayed to next year

PETALING JAYA: Toll hikes for major highways have been postponed to 2022 to ease the burden of the people due to the rising cost of living, says Works Minister Datuk Seri Fadillah Yusof.

Fadillah said delaying the toll hikes, which were supposed to take effect on Jan 1 this year, will cost the government RM2.25bil.

He noted the estimated compensation for the increase of toll rates for Kesas Highway, South Klang Valley Expressway (SKVE) and Lebuhraya Pantai Timur 2 (LPT2) will only cost the government RM160.1mil.

However, he said the continuation of the postponement of toll rates involving 21 highways and one toll plaza will cost the government RM2.093bil.

As such, Fadillah said following the postponement of the increase of toll rates this year for all related highways and toll plazas, the total estimated compensation would amount to RM2.25bil.

Fadillah, in a statement, said this decision was made on Wednesday.

He also said the government had agreed to the restructuring of toll rates to be finalised before 2023.

The most recent increase was in 2015 where 18 highways had increased their toll rates. This included the DUKE, LDP and MEX highways.

The Putrajaya MEX highway increase was from RM2.50 to RM3.50 while the Salak Selatan MEX highway went up 50 sen from RM1.50. 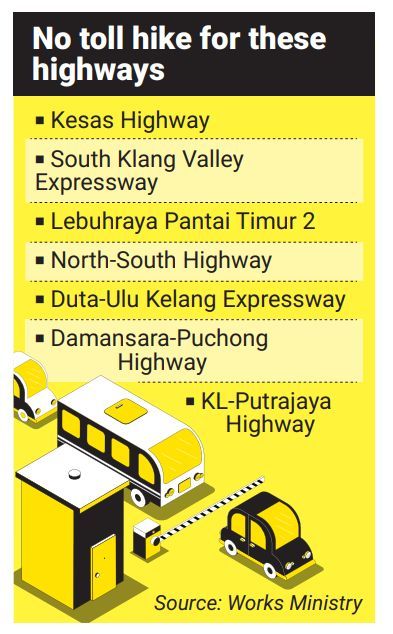 Meanwhile, Malaysians have welcomed the move.

Daniel Lee, 33, described the decision as a “good idea” but expressed concern over the huge compensation to the highway concessionaires.

“I think that the ideal scenario for everyone at this time is to postpone the toll hike and perhaps defer the compensation payout as well.

“This is because the government is already saddled with a budget deficit to revive the economy damaged by Covid-19. It’s time for the highway concessionaires to play their role in alleviating the rakyat’s burden by at least deferring the RM2.25bil compensation payout, ” the finance manager said.

Lee added the money from the compensation payout can instead be used to procure vaccines.

Michelle Tan said the postponement was timely as a lot of people were burdened by the increased cost of living.

“It’s a really tough time for everyone, so for people regularly commuting to and fro, this is a welcome news.

“Saving a few ringgit may not seem like much but it goes a long way for people trying to make ends meet during this challenging time. I regularly use some of these major highways myself – so it’s definitely a plus point, ” the 28-year-old teacher said.

Thama Jeyaraj said she was glad that the highway operators had agreed to postpone the toll hike.

“I use the DUKE highway to travel to work every day so this is really good news. It will certainly ease the burden of the people, ” she said.

On Facebook, Sarkunan Manikam said highway concessionaires should have given a moratorium to the government too.

However, Chue Nang said she would rather have the toll hike than for the government to keep compensating highway concessionaires.

“One year of toll hike postponement will cost the government RM2.25bil. Is it really worth it?” she asked.