PETALING JAYA: New Covid-19 cases continue to spike with 3,332 recorded nationwide and with Selangor recording the most with 1,083.

Health director-general Tan Sri Dr Noor Hisham Abdullah, in a statement, said the new cases in Selangor included 36 from existing clusters, 705 from close contact screening and a further 342 from other testing.

Sarawak recorded 522 new cases, with 48 from existing clusters, 404 from close contacts screening and 70 others from other testing.

Dr Noor Hisham said Kelantan recorded 401 cases, with 99 from existing clusters, 233 from close contact screening and 69 from other testing.

As of yesterday, Dr Noor Hisham said there were 28,093 active cases and 1,943 recoveries recorded –bringing the cumulative number of recoveries to 375,340 since the start of the outbreak last year.

He added there were 15 deaths, involving 14 locals and one foreigner, bringing the death toll to 1,492.

“A total of 83 clusters recorded an increase in new cases, ” he added. 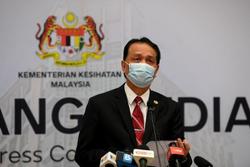