Saying that he understands and admits the difficulties the people face in earning an income to survive the pandemic, the Prime Minister stressed that there must be humanity and wisdom when taking action.

“Many are struggling to earn a living during the pandemic. There are some who run small businesses such as selling burgers, snacks, drinks or their own crops.

“They are not owners of big companies or business institutions but mere licence holders who trade in a small way.

“So, even if we have to take action against them for violating the SOP and the rules, we should be considerate. Impose a compound but at a reasonable rate.

“Strictness is important to ensure rules are obeyed, but at the same time there must be wisdom and humanity when taking action according to the limits of law, so that our efforts to educate the public is accepted, ” he said at the launch of the Covid-19 Green Community Zone Competition here yesterday.

Muhyiddin said this was important, especially since the pandemic has had a major impact on the lives of the people.

“I hope with cooperation and understanding from the authorities it will empower the community to ensure success in controlling Covid-19 infections, ” he added.

It was reported that several traders in Kelantan, including a burger stall operator and a rojak seller, were fined RM50,000 after allegedly operating beyond the permitted hours of the movement control order there.

The incidents have caused an uproar on social media as both said they were merely eking out a living and even if their fines were reduced, they would not be able to pay up.

Muhyiddin added that apart from continuous monitoring by enforcement agencies, the community also had an important role to play in ensuring that the public complied with the SOP, which had been often repeated, like wearing facemasks, maintaining physical distancing and avoiding crowded and cramped places.

“There are new variants of this virus that are spreading faster and have a worse effect in terms of a more drastic increase in cases in some countries.

“We definitely want to prevent the spread of these new variants in our country, ” he said.

Muhyiddin also said the government was taking strict steps to curb the spread of Covid-19 with national border controls being tightened by banning visitors from countries affected by the new Covid-19 variants, besides taking stern action against individuals violating mandatory quarantine directives.

“Strict action by the government alone is not enough. What is more important is that the people have a high awareness and comply with all rules and the SOP in order to protect all of us from the dangers of this virus, ” he said. 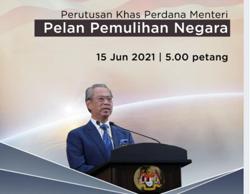