Sandy beaches being washed away

GEORGE TOWN: The once beautiful golden sandy strip along the popular tourism belt at Batu Ferringhi is now nearly all gone.

All that’s left are exposed boulders after the sand was washed away due to severe beach erosion.

Conservationists and environmentalists are baffled by the severity of the erosion and also concerned over the possibility of loss of marine life on the seafloor.

“In general, among the contributors to coastal erosion are buildings too close or too intensive in high-risk coastal areas, changes in the pattern and density of human settlement, industrial or rapid and widespread development on the coast, or removal and interference with natural protective features such as mangroves.

“Other factors are sea reclamation and coastal dredging for sand and gravel, control of river flow, construction of protective structures that reduce or eliminate adaptive capacity, and low-lying areas being affected by climate change.”

Mageswari said climate change would worsen coastal erosion, especially in areas where sea levels were rising and the damage would be amplified by strong storms that cause very high waves.

“Coastal erosion is getting worse and Batu Ferringhi is in danger. We urge the authorities to identify the cause and take quick mitigation measures, ” she said.

Among the most severely affected part is a 350m stretch of beach behind a popular resort and spa that is now almost entirely washed away, leaving behind damaged infrastructure.

The resort’s communication director, who declined to be named, said almost 10m of the beach was now gone. 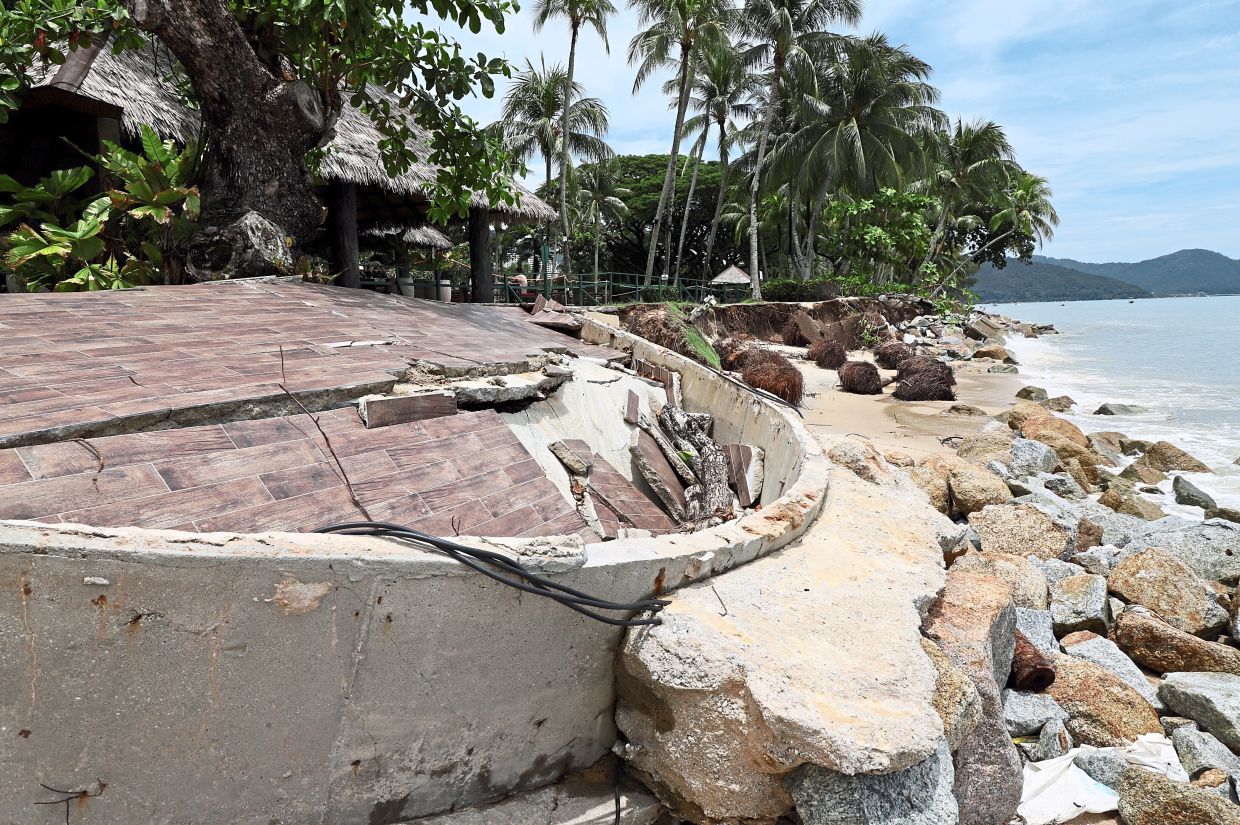 Exposed to the elements: Soil erosion caused by waves has destroyed a large tract of this once pristine beach in Batu Ferringhi, Penang. — LIM BENG TATT/The Star

“The waves are reaching our gardens. This phenomenon of strong waves pounding the shore started early last year and has been getting worse.

“Strong waves during high tides have washed away all the sand, exposing the large rocks underneath, ” he said.

The waves also uprooted 40 coconut trees which were planted during the resort’s major redevelopment project in 2004 as well as three Casuarina trees that were at least 30 years old, he added.

Several buildings next to the beach owned by the resort were also damaged.

“Four counters made of tiles and cement in a water sports hut collapsed after strong waves washed away the foundation beneath.

“For safety reasons, we have put up warning signs and closed access to the beach from the resort, but some sections further down are still open.

“We hope other (resort) operators will put up similar warning signs, ” he said.

The resort, he said, had contacted state authorities for assistance as the beach is a public area.

“We have lodged reports and are now waiting for action after technical teams came to inspect.

“Discussions are being held with our consultants to see what immediate measures we can take to prevent further soil erosion, ” he said.

Regular travellers from other countries who had been coming here since the 1970s noticed the “disappearing beach”, he added.

Penang works committee chairman Zairil Khir Johari said discussions were being held with agencies such as the Department of Irrigation and Drainage, Penang Island City Council and Land Office as well as the resort to work out a solution.

“There were structures there that have collapsed. The weight of the structures may have played a role also, but this hasn’t been confirmed yet, ” he said.

“The resort has appointed a consultant and they are supposed to submit plans for repairs.”

Severe beach erosion is defined as occurring when more than 4m of the beach are washed away.