JAKARTA(Bernama): In addressing the crisis in Myanmar, the country needs to de-escalate the situation on the ground and stop the killing and violence against civilians, says Malaysian Prime Minister Tan Sri Muhyiddin Yassin.

This was one of the three proposals put forward by Malaysia to Myanmar at the special Asean Leaders' Meeting at the Asean Secretariat here Saturday (April 24).

"Secondly, release all political detainees promptly and unconditionally," the prime minister said during intervention at the meeting, which was attended by Asean leaders and Senior General Min Aung Hlaing of Myanmar, the junta chief.

Third, he said, Myanmar needs to allow the Asean chair and Asean secretary-general to have access into Myanmar, including to all the parties concerned.

The Myanmar crisis takes centre stage at the meeting after the country's military overthrew the civilian government on Feb 1 and declared a year-long state of emergency.

The coup triggered mass protests which were met with deadly violence resulting in hundreds of people being killed.

Muhyiddin also said that in none of the proposals was the Tatmadaw (Myanmar's armed forces) not part of the solution.

"We realise that the success of Asean's efforts on Myanmar very much depends on the willingness of the Tatmadaw to cooperate," he said.

Malaysia, he said, stands ready to engage constructively with all parties and galvanise efforts with all Asean member states towards helping Myanmar overcome the current political crisis.

"Malaysia hopes that Myanmar will continue to work with Asean to uphold its principles," he said.

Muhyiddin issued a stark warning that the deplorable situation in Myanmar must stop immediately.

"Malaysia believes the killings and violence must end. All parties must urgently restrain from any provocations and actions that will perpetuate violence and unrest," he said.

The prime minister called for a meaningful, inclusive political dialogue which can only take place with the prompt and unconditional release of political detainees.

"This would be a good starting point and ease international pressure on Myanmar and Asean," he said.

In drawing attention to the Asean principle of non-interference in the internal affairs of other Asean member states, Muhyiddin said it did not mean the grouping should ignore a serious situation that jeopardises the peace, security and stability of the region.

"The principle of non-interference is not for us to hide behind; it cannot be a reason for our inaction," he said.

The prime minister said there is a tremendous expectation on the part of the international community in how Asean is addressing the Myanmar issue.

"Within the Asean domain, constructive engagement is anchored in trust, understanding and goodwill," he said.

Muhyiddin also had a special message for the people of Myanmar. 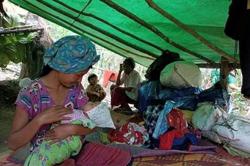