“I personally think CBN should be allowed to continue operating.

“Land ownership matters are up for discussion. I would like to meet the CBN Sisters and hear them out to understand the issue better and see how to preserve the school, ” he said when contacted yesterday.

Annuar said the issue revolving around the land lease was never referred to him despite it being located in the Federal Territory of Kuala Lumpur, and he had been trying to get more information on the matter.

He noted that all federal land matters fell under the Energy and Natural Resources Ministry and the Chief Secretary to the Government under the Prime Minister’s Office.

“I have also asked the Federal Territories Land and Mines Office director for further details on the background of the matter and its status report, ” he added.

He was asked to comment on the CBN issue, which has been in the news after the government decided not to renew the land lease.

The 122-year-old mission school is currently operated by its owners under the school board, Lady Superior of the Society of Saint Maur.On Tuesday, Federal Territories Land and Mines Office director Datuk Muhammad Yasir Yahya said CBN would not be demolished once its lease expired and the land it sat on would revert to the government so it could be gazetted as a fully-aided government school.

But lawyer Derek Fernandez questioned Muhammad Yasir if the matter had been put to the Cabinet.

Such matters, he said, were to be decided by the Cabinet after extensive stakeholder discussions and not something the Federal Territories Land and Mines Office was authorised to act on arbitrarily.

“In fact, the various ministers formerly in charge of natural resources at the relevant times should shed light on this matter as the application to renew the lease was allegedly made (as reported in the media) on Oct 4,2017, and the rejection was received on Dec 18 last year.

“They should let the public know whether such an application was ever referred to them at all during their tenure or if such a policy decision was made as the basis for rejecting the application, ” Fernandez said in a statement yesterday.

On April 7, the Lady Superior of the Society of Saint Maur was granted an application for leave for a judicial review to challenge the government’s decision not to extend the school’s land lease.

The school had written to the Land Office on Oct 4,2017, to seek an extension of the land lease.

The school received a reply on Dec 18 last year that the lease would not be renewed.

The lease is due to expire on Sept 6 this year and the school is seeking a stay against the authority’s decision.

The all-girls school, established in 1899 by nuns of the Sisters of the Holy Infant Jesus as an institute dedicated to the education and training of underprivileged children and the betterment of their lives, is located in Jalan Bukit Nanas, Kuala Lumpur. 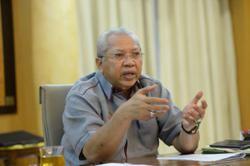