PETALING JAYA: The High Court has granted an application for leave for judicial review by Convent Bukit Nanas to challenge the government’s decision to not extend the school’s land lease.

The application for judicial review was filed on April 7 on behalf of the Lady Superior of the Society of Saint Maur, the corporate entity operating the Convent Bukit Nanas school.

In the judicial review application sighted by The Star, the Federal Territories Lands and Mines director was named as the sole respondent.

According to the document, the school had written to the Lands and Mines office on Oct 4, 2017, to seek an extension of the land lease.

The school received a reply on Dec 18, 2020, that the lease would not be renewed.

The lease is due to expire on Sept 6, 2021, and the school is seeking a stay against the authority’s decision.

Among others, the judicial review application is seeking a certiorari order to quash the decision by the Lands and Mines office to refuse the land lease extension, a mandamus (writ) to compel the Federal Territories Lands and Mines director to revoke a land lease non-renewal letter dated Dec 18, 2020, and a stay of proceedings.

An extension of time to file the application was also allowed, he said.

“The stay of proceedings will be heard inter parte on May 4 at 2.30pm, ” Chan said after the hearing yesterday.

When contacted, the Society of Saint Maur declined to comment.

The all-girls school, established in 1899 by nuns of the Sisters of the Holy Infant Jesus – an institute dedicated to the education and training of underprivileged children and the betterment of their lives – is located along Jalan Bukit Nanas, Kuala Lumpur.

Convent Bukit Nanas is one of the oldest schools in Malaysia. 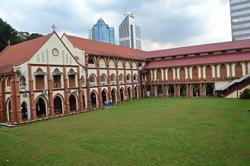