SHAH ALAM: The Rasuah Busters initiative has launched its 100 Million Steps Against Corruption campaign in a bid to recruit the rakyat in the fight against graft.

Karangkraf Media Group chairman Datuk Hussamuddin Yaacub said the campaign was intended to act as a call to action for members of the public to say no to corruption.

"We want to raise awareness among all Malaysians of the moral decay that corruption causes.

"The whole family can get involved simply by registering for the event which is scheduled to run from Tuesday (April 13) to June 30," he told reporters after launching the campaign at Karangkraf headquarters here on Monday (April 12).

Hussamuddin said he hoped the campaign could bring about a spirit of togetherness that would lead to a push for change in Malaysia.

The campaign aims to sign up at least 10,000 Malaysians to pledge a number of steps over a 30-day period to reach the overall target of 100 million steps.

According to the campaign website at https://cps4.me/100juta, the organisers hope that each step taken will represent a step towards wiping out the culture of corruption.

"Those interested can register for free at the website. During registration, you can choose to pledge 10,000,20,000 or 50,000 steps over 30 days," he said, adding that all registered participants who submit their steps to the leaderboard will be eligible for a lucky draw with an iPhone 12 Pro as the first prize.

Hussamuddin also welcomed the "Coalition of the Willing", a strategic grouping of authorities, non-governmental organisations and corporations.

"This coalition comprises over 100 members including the Malaysian Anti-Corruption Commission, Bersih 2.0, National Patriots Association, and the Centre to Combat Corruption and Cronyism (C4), and will be directly involved in the campaign," he said.

Hussamuddin said the people must also make a stand and drive home the message that they reject corruption and want it removed from society.

Meanwhile, C4 executive director Cynthia Gabriel said protection must be given to whistleblowers in corruption cases, as this was important to encourage an anti-corruption culture.

"If anyone is afraid or worried about which agency they should channel their information, how will the message of anti-corruption be successfully spread?" she said. 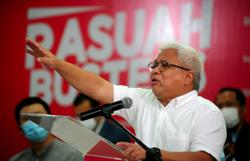 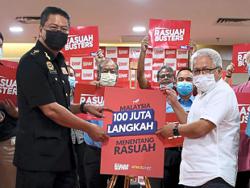