KUALA LUMPUR: The Royal Malaysia Police (PDRM) is expected to be equipped with 2,040 body-worn cameras as early as September.

“We expect the men and women in the police force will be able to use the body cameras by September or November this year.

“The police, through the Home Ministry, are in the final stages of procuring the body cameras as we have entered the tender phase, ” he told The Star yesterday.

“The body cameras will be used by those on patrol as well as during special operations. It will be utilised mostly by police personnel on the ground, ” he said.

“Equipping police personnel with body cameras is a step in the right direction towards strengthening the integrity of the police force.

“Proper usage of the body cameras enables my men to prove that whatever action taken by them is transparent and recorded for later verification. It will improve accountability and will help prevent slander and lies against police personnel in the course of carrying out their duties, ” he said.

Abdul Hamid said he had given top priority to improve the integrity of the police force.

“Wearing the body cameras is a form of check and balance on the actions of police personnel. I certainly welcome it as the level of accountability will be raised, ” he said.

Meanwhile, Malaysians Against Rape, Assault and Snatch Theft (Marah) founder Dave Avran welcomed the use of body cameras by the police.

“It is a good tool and we support it as it offers transparency and accountability.

“This move will also help mend the trust deficit between the public and PDRM, ” he said.

He said body camera footage could be useful in court as it could confirm that an offence was committed as well as identify the person who committed it.

“Officers are normally allowed to deactivate the cameras at their discretion depending on the situation, such as during investigations of sexual assault cases or when the officers go for a bathroom break for example, so the cameras are not a full solution, ” he said.

“The police should be fully aware of privacy laws and engage the relevant stakeholder groups before using the body cameras, ” he said.

Dave said precautions should be in place to protect youths and juvenile offenders, including protection from public screening of the video.

“Victim confidentiality must be protected during a call for assistance for domestic violence.

“If an officer is entering the home of a domestic violence situation, the victim is exposed. We need to consider how that plays out later in recordings. Will she and her children be re-victimised?

“It will become hard for victims to come forward when everyone will know their story and identity based on the video footage. The victim may even be reluctant to report crimes, ” Dave said.

During the 214th Police Day celebrations on March 25, Prime Minister Tan Sri Muhyiddin Yassin said RM30mil had been allocated to acquire body-worn cameras to protect policemen and officers from slander by criminals and irresponsible parties. 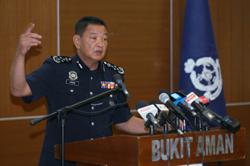