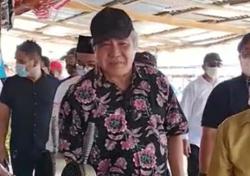 A screenshot from the viral video showing Awang Tengah without a face mask at a recent event in Matu.

Awang Tengah said he had been contacted by the police over the matter and acknowledged his mistake.

"The police told me that I have been issued a compound. Of course I will pay it," he said at the Sarawak Timber Industry Development Corporation's assembly here on Thursday (April 8).

He did not mention the amount of the compound.

Awang Tengah was responding to a viral video clip which showed him visiting hawker stalls without wearing a face mask during his visit to Matu on March 31.

The video also showed him giving money to the hawkers.

Awang Tengah said he went around the stalls at the end of his visit and took off his mask to have a drink and eat some kuih which he bought from the traders.

"After that I was informed by my officer that we had to leave immediately.

"I forgot that my mask was off.

"I wanted to be quick, so I handed some money to the traders and asked them to pack the things I wanted to buy, which my officers would pick up.

"I acknowledge that it was my mistake. I was really in a rush when I was told that I had to leave," he said.