Teen waitress pretends to have Covid-19 to get out of work, gets arrested instead 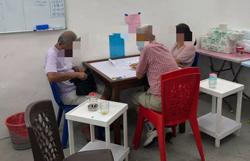 ISKANDAR PUTERI: A 19-year-old waitress was arrested here for allegedly faking her Covid-19 test results to get out of going to work.

Iskandar Puteri OCPD Asst Comm Dzulkhairi Mukhtar said that the teenager was arrested at about 1pm at her house in Mutiara Rina area on Tuesday (April 6) to assist in investigations following a report lodged by her employer on the same day.

"The 32-year-old restaurant owner received a photo of a letter through WhatsApp from his employee, claiming that she tested positive for Covid-19.

"This led him to close his restaurant and went to get a Covid-19 swab test, along with 12 of his other employees, where they all tested negative," he said in a statement here on Wednesday (April 7).

He added that the employer then asked the teenager about the matter, and she admitted that she had lied earlier.

"According to the employer, she said that she lied as she felt the job as a restaurant waitress does not suit her.

"He also said that she has worked for only one day prior to the incident," said ACP Dzulkhairi.

He noted that the case is being investigated under Section 420/468 of the Penal Code for faking her Covid-19 test result report.