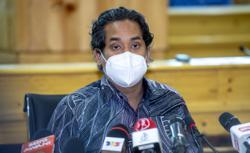 PETALING JAYA: The Covid-19 contagion in the country would be better controlled if the infectivity rate is at 0.8 instead of the 1.01 recorded on Sunday, said Health Minister Datuk Seri Dr Adham Baba (pic).

R0 refers to the average number of people that one infected person will transmit the virus to.

The R0 had exceeded 1.0 in the past two days, he told a press conference yesterday.

On the possibility of a fourth wave of the pandemic, Dr Adham said this would depend on the opening of borders.

There had been nine cases of the South African variant detected in Malaysia, he said, adding that the infected individuals had been quarantined.

The third wave was said to have begun in September last year with Covid-19 cases peaking to about 5,000 cases in late January this year before dropping to its lowest number of daily cases on March 29 with 941 cases.

Dr Adham assured that hospitals were ready for any eventuality.

As of yesterday, Dr Adham said there are seven hospitals dedicated solely for the treatment of Covid-19 while 56 other hospitals are deemed hybrid hospitals to provide treatment for Covid-19 and other illnesses.

On concerns over a rise in the number of infections following the opening of schools, Dr Adham said the situation is being closely monitored by district health offices.

Between March 20 and April 4, he said there were 20 school clusters with Kelantan recording the highest number of infections among teachers in several schools and an institution of higher learning.

It was previously reported that there have been 41 Covid-19 clusters originating from schools and universities since January, resulting in 2,268 positive cases so far.