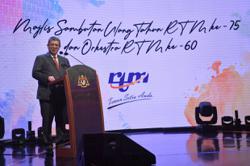 Its famous orchestra, Orkestra RTM, is the Longest Running Orchestra, having celebrated its 60th anniversary yesterday.

During the special celebration, RTM’s Angkasapuri headquarters and 14 other state branches also released 75 balloons each simultaneously, earning it another feat in the MBOR.

Guests and artistes arrived at the launch of RTM’s 75th anniversary and Orkestra RTM’s 60th anniversary celebrations at Auditorium Perdana for a spectacular day of fun and festivities, which was also aired live on its television channel and online.

Health and safety measures were also in place to ensure the event was in line with the Covid-19 standard operating procedure.

Prime Minister Tan Sri Muhyiddin Yassin, who made a virtual appearance to deliver his speech, urged RTM to be bold to change and continue creating milestones in the national broadcasting and media production industry, and for its content to remain fresh and relevant.

“The slogan ‘RTM: Teman Setia Anda (Your Faithful Companion)’ is indeed synonymous and reflects the services that RTM provides to the people.

“RTM should not be afraid to make the necessary changes in the era of the Industrial Revolution 4.0 and to use its expertise and experiences to always improve, sustain and further develop its services, ” he said.

Muhyiddin also lauded RTM for playing its role as the catalyst for the country’s creative industry, especially in media development and also broadcasting, music and communications technology.

“Apart from that, RTM also played a role in the fight against the Covid-19 pandemic as one of the government’s channels in disseminating verified information to combat rumours, fake news and accusations that were posted on social media.

“The broadcast on radio and television that was conducted in 24 languages and dialects to refute fake news helped tremendously in helping people understand the issues at hand, thus preventing unnecessary panicking, ” he added.

Muhyiddin also congratulated RTM for the launch of the RTM Sports Channel, which he said opened a new chapter in meeting the needs of viewers, especially sports fans.

Saifuddin, in his speech, said the sports channel was an important milestone for RTM as sports was a “unifying factor” among Malaysians, besides opening up opportunities for local production companies to produce sports-related content for RTM.

Commemorating 75 years of connecting the government and the people through its six television and 34 radio channels, he said a series of programmes had been lined up at Angkasapuri and also its state branches nationwide, including new styles in content delivery.