PUTRAJAYA: Selangor’s delay in deciding on the alignment for the East Coast Rail Link (ECRL), which is already 12 months behind schedule, is costing the government RM1.25mil a day, says Malaysia Rail Sdn Bhd.

Its chairman Tan Sri Mohd Zuki Ali said there should be no excuse by the state to delay the matter as all explanations and briefings on the project had been given.

“The longer the delay, the more it will affect the project.

“It is expected to be completed in 2026 but we are worried what is planned will not materialise, ” he told reporters at the launching of his book entitled Mohd Zuki Ali 365 days: Aspirations and Challenges.

Zuki, who is Chief Secretary to the Government, said the delay was also putting Malaysia’s image at stake as the project was a collaboration with the Chinese government.

On whether the state government would be given a deadline to make the decision, Zuki said MRL was hoping for Selangor to decide soon.

“The matter will be brought to the Cabinet. The Transport Minister is preparing a paper to be presented to the Cabinet, ” he said.

According to reports, Selangor infrastructure and public amenities committee chairman Izham Hashim had said that the state was adamant on defending its stand for the rail network to traverse via a southern route across Negri Sembilan and Putrajaya.

This is as opposed to the northern route via Gombak and Serendah that was announced recently.

On Sunday, Zuki issued a response, saying that MRL had also addressed all matters raised by the various state agencies in the reversion to the ECRL original alignment, and had provided solutions and mitigations involving environmental protection, minimising social impact and improving rail connectivity among others.

In his speech, Zuki said he took office as the country’s top civil servant on Jan 1 last year in a different environment compared to his predecessors.

“I reported for duty in the midst of political crisis and the spread of Covid-19 that dragged the country into a lockdown and slow economy.

“Among the challenges that I was concerned with was how to revive the economy. At that time, people were already facing unemployment and loss of income.

“As Chief Secretary to the Government, I am responsible to ensure the implementation of government policies were smooth and effective, ” he said. 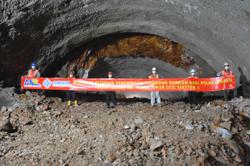