PETALING JAYA: Reverting the East Coast Rail Link (ECRL) to its original alignment was not done to serve any political motive, says the Transport Ministry.

It said that the realignment was done in the hope of maximising the economic and technical benefits of the entire project and its spillover effects.

"The new ECRL 3.0 alignment based on the original alignment of the ECRL project back in 2017 allows for a bypass line from Serendah to Port Klang for KTMB services to be integrated into the entire project.

"This will make the rail service more efficient as it serves as a significant freight relief line for the service which currently faces bottlenecks when traversing Kuala Lumpur’s central business district (CBD)," he said.

He said the original alignment also links Kuantan Port on the east coast and Port Klang on the west coast of the peninsula, creating a direct route to international trade and would greatly boost export-oriented industries.

"This last mile connectivity brings both coasts closer together with a 'land bridge' to ease the transfer of goods," he said in a statement on Tuesday (March 30) as he explained why Section C of the rail line (Mentakab to Port Klang) should pass through Gombak and Serendah, instead of via the southern alignment proposed by Pakatan Harapan.

He also said the northern alignment will generate immediate traffic for both passengers and cargo for ECRL in its first year of operation, where it is expected to see 26 million tonnes of cargo freight and five million passengers per annum.

In comparison, the southern alignment is expected to transport nine million tonnes of cargo and four million passengers per annum.

The idea of building the southern alignment via Negri Sembilan was first announced by Lim Guan Eng at the Rantau by-election in 2019 when he was finance minister under the Pakatan government.

Dr Wee said the ECRL 3.0 alignment is also expected to boost new developments and townships as well as spur commercial activities in new areas such as Puncak Alam and Kapar where future ECRL stations are planned.

Dr Wee also argued that while some may assume that continuing with the southern alignment may be cheaper, it actually prevents the entire ECRL project from becoming a true integrator and hub for the various economic regions in Peninsular Malaysia.

He said even if the southern alignment were to proceed, the Serendah bypass would still need to be constructed to solve KTMB's bottleneck issue.

Furthermore, continuing with the southern alignment would also be a bigger environmental threat, he argued, especially when referring to the water catchment.

This is due to the necessity of having construction at two different areas, as the southern alignment cannot do away with the need to have the bypass at Serendah to allow for the movement of KTMB trains. 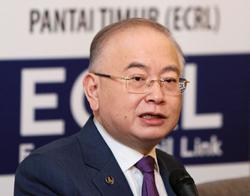