KUALA LUMPUR: Umno will demand that Perikatan Nasional hold the general election as soon as the state of emergency is lifted on or before Aug 1, says Datuk Seri Dr Ahmad Zahid Hamidi.

The Umno president said this was a unanimous decision of the general assembly.

“We will bring this issue to the supreme council for final endorsement, ” he told a press conference at the close of the Umno general assembly 2020 yesterday.

He said Umno was not at a crossroads as its way forward was firm and clear.

In his winding-up speech earlier, Ahmad Zahid said Umno had given its supreme council and president the mandate to withdraw support for the Perikatan government “at any time it deems fit”.

He said that this was the indication the party leadership received from the general assembly “if the general election is not forthcoming”.

“If what I observe is right, please stand up and show your support. Let the permanent chairman put this on record, ” he said, adding that the 1,000 over delegates who attended the assembly stood up to show support.

Ahmad Zahid believed that all Umno ministers, deputy ministers and chairmen of government-linked companies (GLCs) would fully support the decision and resign from their posts. All for it: Delegates supporting the stand taken by Umno to sever ties with Perikatan. — Pic courtesy of Umno Media

He hit out at a minister who was not present, saying he would not have a Cabinet post if not for Umno.

“He was given a cushy job but he has backstabbed Umno.

Ahmad Zahid, however, said he believed other Umno leaders were loyal and would carry on the party’s aspirations without turning their backs on Umno.

On Friday, Prime Minister Tan Sri Muhyiddin Yassin, who is also Parti Pribumi Bersatu Malaysia president, said he had no issue with whether Umno wanted to cooperate with his party or not.

“We have formed a good relationship with all parties, which led to the formation of Perikatan, but what is important right now is how we face the future, ” he added.

He was responding to Umno deputy president Datuk Seri Mohamad Hasan, who said the party was not willing to play second fiddle to any party that wanted to work with Umno.

He added that Umno could not be a party that was merely used to fill up quotas or the number of seats needed to form a government.

“No party or individual can tell or direct Umno on how and who we should negotiate with to form a government.

“Umno shall decide and must be allowed to show its mettle as a political party without sacrificing its interests, ” Mohamad said when opening the meetings of the party’s Youth, Wanita and Puteri wings on Saturday. 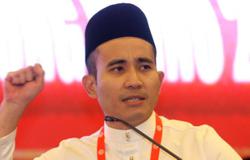