KUALA LUMPUR: Gerakan will leave it to the Perikatan Nasional presidential council when it comes to seat allocations for the next general election.

Gerakan president Datuk Dr Dominic Lau said while the party had its own "wish list", its focus was to help ensure victory for the ruling coalition.

"We don't talk about seats anymore. Our priority is to ensure that Perikatan Nasional wins in the 15th General Election (GE15).

"This is in line with our ideology. We need to have stable politics in our country," he told reporters during the party's 53rd anniversary celebrations on Wednesday (March 24).

He said while seat allocations had yet to be discussed, preparations for GE15 had already begun.

Dr Lau also said that any political party against Perikatan would be considered a foe.

Asked if Penang would be one of the party's focus states, Dr Lau said it would.

In his speech earlier, Dr Lau said the party's ideology remained unchanged but its implementation may differ over time.

"We cannot use the traditional method to convey our message to the people. We have to use new technology, innovative ways and social media to convey it," he said.

In GE14, Gerakan lost all the 11 Parliamentary and 31 state seats it contested.

After Pakatan Harapan took over the Federal Government, Gerakan decided to quit Barisan Nasional in June 2018.

The Pakatan government collapsed in February last year, which led to the formation of Perikatan. 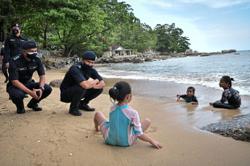