PETALING JAYA: Not only the people are confused over ways to appeal the RM10,000 fine for breaching the standard operating procedures (SOP), but health authorities in different states are also facing the same predicament.

State Health Departments said they were not authorised to handle appeals or reduce the fine, according to a report by Sin Chew Daily on Monday (March 15).

Checks revealed that they could not ascertain the clear process needed for people to appeal the fine.

Petaling Jaya district health officials have advised the people to apply for a permit to travel to the Health Ministry in Putrajaya to file their appeal with its director-general Tan Sri Dr Noor Hisham Abdullah.

A check at the office found that a notice, signed by a district health officer, said the office could not process any appeal.

Those who came to the office were also told to prepare their appeal letter to ease their application for a police permit to go to Putrajaya.

About nine people who came to the office to file an appeal on Monday had no choice but to return.

Those who came to pay their RM1,000 fine were also told that they were not allowed to ask for a lower amount.

Those who had insufficient cash also had problems due to the office's "cash only" policy.

When asked, the reporter was told that only the Health director-general's office could handle appeals.

However, when checked, the reporter was told otherwise.

When contacted, a Perak Health Department's investigation and legal division chief reportedly said that offenders should settle the summonses within 14 days.

Those who want to appeal, he said, can only do so after 14 days.

"The Perak Health Department will call up the offenders who did not pay after 14 days, gather their details to open an investigation paper.

"Upon completion, it will be submitted to the court to set a date and offenders can appeal then," he said, adding that the court will determine the final amount of fine.

A district health officer from Kuantan, who spoke on the condition of anonymity, said they were not informed of handling any appeal for fines of breaching the SOP.

"We are not authorised to accept or process. Those who are fined have to be patient and wait for further instructions," said the officer.

In Penang, a check at the Timur Laut district health office found that no discounts or reduction can be granted for those fined for not following the SOP.

A notice was also put up, saying that those who did not pay the fine and later charged in court, can appeal during the proceeding.

Man fined RM10,000 for not registering details when visiting restaurant

Teen slapped with RM10,000 compound for not registering details during visit to grocery shop

IGP: 330 individuals have been compounded RM10,000 for MCO violations so far 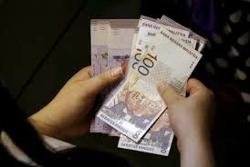