Moviegoers from same household can sit in pairs GEORGE TOWN: Moviegoers can now sit in pairs if they are from the same household.

Regional marketing director of mmCineplexes, Jason Teo, who wanted to be known only as Jason, said they have received a directive stating that moviegoers are now allowed to do so.

“We have put up notices within our cinema premises to remind moviegoers of this rule.

“At the usher points or when they buy the tickets, our staff members will also ask if they are from the same household.

“As this is the directive we have at the moment, we hope everyone will cooperate with us, ” he said.

Teo added that as the seating arrangement will be in pairs

now, moviegoers who are going solo to watch movies will be entitled to two seats for the price of one.

“As we set the seating system based on the arrangements, whenever someone buys even a single ticket, the system blocks out a pair of seats automatically.

“And as the next two seats after that are to remain unoccupied under the standard operating procedure, solo moviegoers will be blissfully distanced with three empty seats beside them, ” he said.

Teo also said that online ticketing would continue to be encouraged more than buying from the counter.

“We hope people will use ticketing apps, ” he said. 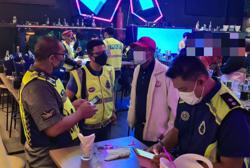