The court had been told before this that Lewis & Co was the trustee of the Yayasan Akalbudi owned by Ahmad Zahid.

Based on the 14th and 15th charge, Ahmad Zahid is alleged to have received bribes amounting to RM6mil from Chew as an inducement to appoint Datasonic Technologies Sdn Bhd (DTSB) to implement a five-year passport chip project or 12.5 million chips for the Malaysian passport polycarbonate biodata page for the Immigration Department through direct negotiations under the Home Ministry.

Mohd Hizar Farhan said the cheques were obtained from Chew following a shortage of passport supply in 2016 after DTSB was awarded the passport chip supply contract in 2015. 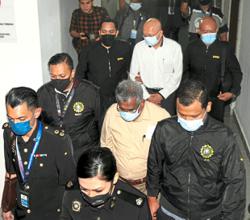