PETALING JAYA: The police have arrested a 32-year-old man after he brandished a fake gun at a female ride-sharing driver on Monday (March 1).

"The incident occurred at Jalan PJU 10/3. The victim used her car horn after a car was being driven erratically in front of her. The driver then showed her an object that resembled a gun," said Petaling Jaya OCPD Asst Comm Nik Ezanee Mohd Faisal (pic).

He said in a statement that the suspect was arrested on Wednesday (March 3) at Bandar Sri Damansara and the fake gun was found on the suspect's hip.

"He confessed that he showed the fake gun because he was angry at the victim," he said.

ACP Nik Ezanee said the suspect was found to have a prior drug-related offence and is unemployed and added that he has been remanded for three days.

In an unrelated case, the police have arrested four men for suspected snatch theft.

The group were arrested after police were following up on a snatch theft case on Oct 11 last year, where a 44-year-old man had his gold chain stolen.

"On March 2, the four suspects were arrested in Jinjang. Three confessed to the crime.

"With their arrests, we have solved seven snatch theft cases in the Kota Damansara area," he said. 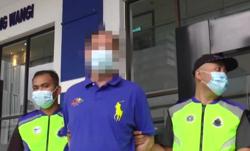