KUALA LUMPUR: A pair of siblings and another man were killed following a head-on collision between two vehicles along Jalan Kuching here.

It is learnt that the driver of the car had lost control of the vehicle and rammed into a road divider at Jalan Kuching near the Segambut roundabout at about 12.30am on Sunday (Feb 28).

Kuala Lumpur Traffic Investigation and Enforcement department chief Asst Comm Zulkefly Yahya said the impact sent the car into the opposite direction, where it collided head on with a four-wheel drive with a driver and a passenger on board.

"All three victims suffered grievous injuries and died at the scene.

"The car driver has been identified as Muhammad Hafiz Md Isa, 21, while the victims in the four-wheel drive were Lee Pan Nee, 42, and her younger brother Lee Veeran, 35," he said when contacted on Sunday.

ACP Zulkefly said the pair of siblings was on their way to a wholesale market when the accident occurred while the other victim sold milk online.

"The bodies were sent to Hospital Kuala Lumpur.

"Post-mortem will be conducted after Covid-19 tests," he added. 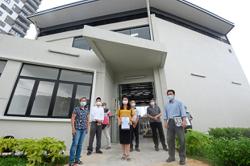