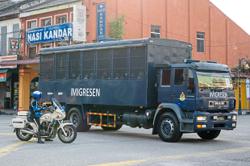 KUALA LUMPUR: The High Court here has extended an extension on a temporary stay order on the deportation of 114 Myanmar refugees back to their homeland.

Justice Mariana Yahya allowed the extension pending its decision on an application for leave to initiate judicial review filed by two non-governmental organisations – Asylum Access Bhd and Aimal Sdn Bhd – in their bid to stop the deportation of the refugees.

The court fixed March 9 to deliver its decision.

On Monday (Feb 22), the NGOs filed the leave application and named the government, Immigration director-general and Home Affairs Ministry as respondents.

When contacted, Senior Federal Counsel Ahmad Hanir Hambaly, who represented the respondents, said he had objected to the application, citing the issue of the ouster clause prescribed under Section 59A of the Immigration Act 1959 and the applicants' locus standi.

Under Section 59A, it is stated that there shall be no judicial review of any act or decision by the minister or the director-general except in regards to non-compliance with any procedural requirement of the Act.

"The applicants (NGOs) are also not the parties affected by the respondent's decision to send the refugees back to their homeland," he added.

The NGOs are seeking an order to strike out the government's decision to deport the refugees, including asylum-seekers and children on claims that their lives could be in danger if they are sent back.

On Tuesday, the court allowed the NGOs' application for an interim stay to halt the government's plan to deport 1,200 Myanmar refugees to their homeland pending the hearing.

The refugees were scheduled to be sent back on Myanmar navy ships on Tuesday (Feb 23).

However, it was reported that the Immigration Department deported 1,086 Myanmar migrants on Tuesday despite the interim court order.