KOTA KINABALU: A turtle conservationist is offering RM10,000 to anyone who can provide information on people involved in serving endangered turtle eggs at a reunion dinner linked to a family member of a former assemblyman.

Alexander Yee said he made the offer in support of efforts by Sabah Wildlife Department to catch and convict people involved in allegedly serving turtle eggs at the dinner, pictures of which were posted on social media.

Yee, who is Foster (Friends of Sea Turtles Education and Research) president, said conservation efforts and enforcement must work in tandem, “otherwise the efforts will be in vain”.

“Towards this end, in my continual effort to render support to our Sabah Wildlife Department, I am personally pledging a RM10,000 reward in exchange for information that leads to the arrest and conviction of the persons responsible for this incident, ” he added.

Yee said he was pleased to hear the state government had ordered a full investigation into the claims that family members of the former assemblyman had served turtle eggs at a recent Chinese New Year reunion dinner.

He was responding to Sabah Tourism, Culture and Environment Minister Datuk Jafry Ariffin’s statement on Thursday that the department was investigating the case without fear or favour.

Jafry previously said investigators had found that without hard evidence of the physical turtle eggs, it would be difficult to get a conviction based on pictures posted on social media, though he assured the public that a full investigation would be conducted.

Yee said Foster and the department have been working together under a five-year memorandum of understanding for sea turtles conservation work on Libaran Island in Sandakan since July 2018.

Having funded close to RM1mil so far for the conservation efforts, he said they have successfully released more than 40,000 baby sea turtles.

Yee hoped that the reward will help motivate the public to assist the department in its probe into the dinner.

The Facebook post of the reunion dinner has been taken down but screenshots of the purported turtle eggs laid out on the table have led various conservation groups to implore the state government to act firmly against those involved. 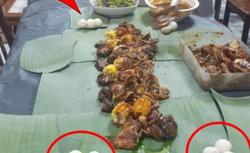