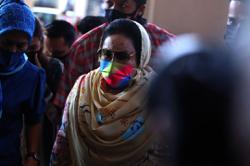 KUALA LUMPUR: Datin Seri Rosmah Mansor Rosmah (pic) says she will testify under oath on the witness stand for her defence trial.

Justice Mohamed Zaini Mazlan delivered the decision at the end of the prosecution’s case here on Thursday (Feb 18).

He said the court had given a maximum evaluation on the prosecution’s case.

“The prosecution had adduced credible evidence to prove the elements under the charges.

“If unrebutted or unexplained, it would warrant a conviction.

“I therefore call for the accused to enter her defence,” said the judge.

Rosmah, 70, has three options - either keep silent and not answer to the charges, give an unsworn statement from the dock without being cross-examined by the prosecution, or testify under oath on the witness stand with the prosecution given the opportunity to question her during cross-examination.

When asked by the court interpreter, Rosmah said she would testify under oath on the witness stand for her defence trial.

Rosmah’s husband, former prime minister Datuk Seri Najib Razak, who was by her side, was spotted briefly putting his arms over her shoulder, when court was in recess.

On Nov 15,2018, Rosmah claimed trial at the Sessions Court here to two counts of soliciting RM187.5mil and receiving RM1.5mil for projects to provide solar energy to rural schools in Sarawak.

On the first count, she was charged with dishonestly soliciting for herself, made through her former special officer Datuk Rizal Mansor, 46, a gratification of RM187.5mil, which is 15% of the value of the contract for the project from Jepak Holdings Sdn Bhd’s former managing director Saidi Abang Samsudin.

On the second count, Rosmah was charged with dishonestly receiving for herself RM1,500,000 from Saidi for the same purpose at No. 11, Jalan Langgak Duta, Taman Duta, here on Sept 7, 2017.

On April 10, 2019, Rosmah was charged again in the Sessions Court here with accepting gratification of RM5mil from Saidi through Rizal for helping Jepak Holdings to secure the same project at the same place in Jalan Langgak Duta.

All the cases had been transferred from the Sessions Court to the High Court for the trial which began on Feb 5,2020.