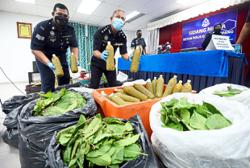 SEPANG: Police say they have crippled a ketum processing and distribution syndicate with the seizure of 240kg of ketum leaves and the arrest of nine suspects including the mastermind.

The suspects, including a foreign couple, were detained in the course of three raids on terrace houses at Putra Perdana in the district on Feb 15.

"Our investigations revealed the suspects were active for over two months and used the houses as processing centres," he told reporters at the Sepang police headquarters on Wednesday (Feb 17).

ACP Wan Kamarul Azran said the suspects would receive orders via phone and sell their product from the three houses.

"The mastermind, a man in his 30s, was among the nine arrested.

"We believe the syndicate had been getting its supply from the north," he said.