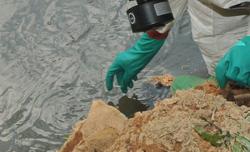 BUTTERWORTH: A police report has been lodged against a factory along the Prai River here after thousands of dead fish, including catfish and spotted scats, surfaced.

"Water samples and fish carcasses were taken to the Department of Environment (DoE) for tests.

"The cause of the deaths is still unknown, but we received information regarding the release of untreated water into the river by a factory operating beside it.

"A police report has been lodged against the factory and we are waiting for appropriate action on the factory management," Marshel said on Wednesday (Feb 10).

He said such incidents need to stop for the sake of the environment and the people.

"I hope the Environment and Water Ministry will take action against parties found to have polluted the river," he said.

The council is also awaiting findings on the river's water quality before deciding if anglers and commercial fishermen may continue to fish from there, he added.

She said the investigation would also involve the Fisheries Department, and that it was too early to conclude if the deaths were caused by pollution or a natural phenomenon.

It is understood that water samples were taken at four points along the river.